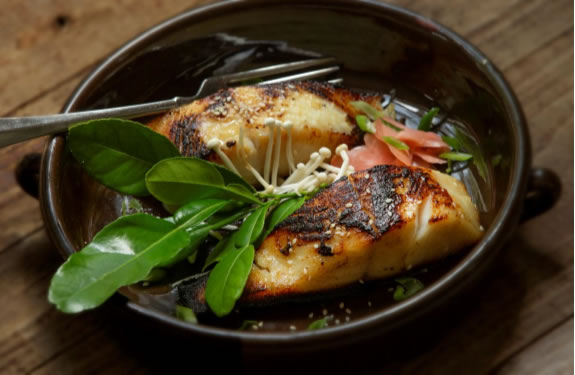 I’ve been asked in the past “if you had to eat only one fish . . . what would it be?” Without question it’s black cod (anoplopoma fimbria). To set the record straight it’s not part of the cod family and it isn’t black. It’s also known as Sablefish, Butterfish, Coalfish, Skilfish and Gindara in sushi restaurants. It has so many names because of its global popularity.

Most of this rich, buttery fish is exported to Japan but it’s widely available cryovaced and frozen (not a problem because its high fat content) and fresh in good fish markets. Black cod makes an excellent substitute for Chilean sea bass which has been generally badly overfished.

Black cod is harvested from northern California all the way through the Aleutian Islands. It is the cold water, Gulf of Alaska source that is the most highly desired. Black cod mature quickly and have long lifespans. The oldest recorded was more than 90 years old. That means they can reproduce early and long, making them a good sustainable seafood choice according to the Monterey Bay Aquarium’s Seafood Watch which ranks it as a “Best Choice”.

Black Cod is an amazing fish. Not to be confused with “true cod” or Pacific cod, it is a deep-sea fish. It can live up to 5,000 feet below the sea. In this cold, dark world it stores a lot of fat in the form of omega-3’s. Black Cod have the highest omega-3 content of any white fish, even higher than most species of salmon. This high omega-3 content makes Black Cod super healthy. The high fat content gives Black Cod its unique silky texture and rich, buttery flavor. One of the reasons why it is also known as Butterfish.

From a cook’s point of view, Black Cod is probably the most forgiving fish to cook. Because of its healthy fat you really can’t overcook it. It will fall apart eventually but it will still be rich and buttery unlike other white fishes that will dry out if they get overcooked. Halibut is a prime example of how quickly the texture changes when overcooked. Black Cod lends itself to every cooking technique including grilled, smoked, broiled, poached, steamed, roasted or sautéed. It is especially good using Asian flavors such as soy, ginger and miso marinades. It is a great fish to serve to kids and others who claim, “not to like fish”.