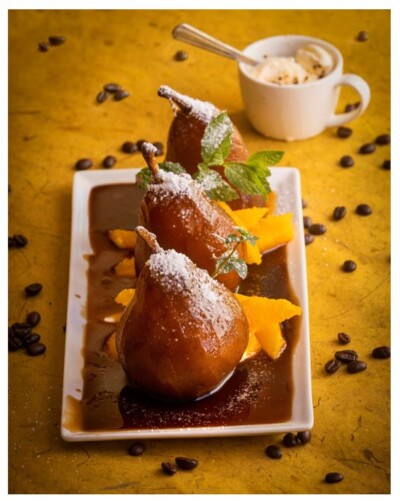 We usually think of coffee mostly as a beverage and then maybe as a flavoring for ice cream or candies. Coffee however has a rich culinary history and has been used in a variety of ways, both sweet and savory.

Authorities seem to agree that it was first consumed in West Africa and the Middle East. There it was first eaten whole; berry, bean and all usually with some kind of fat or in combination with dried fruits and beans. The fermented pulp of the berry was also used to make a kind of wine.

The practice of roasting the beans to develop their aromatic flavors probably started in the 13th century. Alan Davidson, author of The Oxford Companion to Food, notes that in YEMEN by the end of the 13th century, the beverage had acquired its familiar name, Qahwah, which was originally a poetic name for wine. Coffee has many similarities to wine. The language to describe its flavors is similar and like wine, coffee varies tremendously in flavor and intensity depending on the place where it is grown.

No doubt the original appeal of coffee was the stimulating boost it offered from the caffeine it contained. At one time or another, it was called “The Devil’s Brew” and condemned by clerics. Many decried coffee as a potent aphrodisiac. The Vatican among others called coffee “Satan’s latest trap to catch Christian souls”. Pope Clement VIII however intervened and according to legend demanded to taste coffee and make up his own mind. He liked it so much that he decreed that this was something that Christianity should make its own. This probably why Italy became the place where coffee culture first blossomed in Europe (although some French dispute this!).

Coffee has become such a fixture in American culture that it is only natural that we would begin to explore other uses for this deliciously complex product. My first recollection of tasting coffee as something other than as a beverage was a recipe my grandmother used to make. Being of sturdy Scotch/Irish/German descent, she was genetically programmed to never waste anything. She used to take the coffee that had been on the heat too long (you know that stuff that becomes so strong that the acids and bitterness could remove the enamel from your teeth!) and turn it into a wonderful poaching liquid for fruits.

Poaching fruits in wine has been with us for a long time. Coffee has many of the same characteristics as wine: rich flavor, good acidity, tannins, etc. which are a nice foil for sweet fruits. I’ve included her recipe below using pears. The poaching liquid is equally wonderful with other fruits such as apples or firm bananas. The liquid can be used repeatedly and after a while thickens to become the most delicious fruit-infused syrup that is delicious on pancakes, waffles and ice cream.