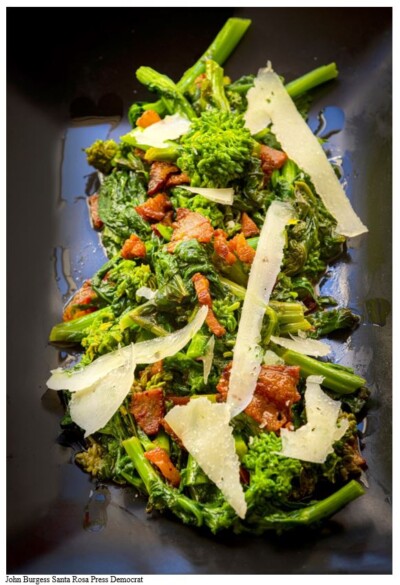 This is about cooked greens as opposed to “salad” greens. Cooked greens are not easily classified under one roof. The biggest group is the brassica or cabbage family, which includes kale, collards, broccoli rabe and mustard greens. Brassicas are native to Europe and Western Asia. Kale and the closely related collard greens probably originated somewhere in the eastern Mediterranean at least 2,000 years ago, though some believe collards may have originated in Asia, where they still grow wild. Kale also grows wild, but in northern Europe and England. Both kale and collards resemble the original cabbage, which did not form a head.

Cooked greens such as collards and kale are mainstays of American Southern cooking where they were usually cooked with smoked or salted pork. Mustard greens were also popular as a part of the “soul food” repertoire of Southern cuisine, sometimes combined with turnip greens.

There are many types of greens for cooking:

• Broccoli Rabe (also known as rapini) similar to broccoli with smaller stocks and florets. It has a pleasantly bitter, peppery flavor.

• Swiss chard: There are several varieties. It has an interesting tart flavor.

• Collard Greens: Wide green leaves whose leathery texture (and often size) can be reminiscent of elephant ears. Large bunches require long cooking, so look for ones with leaves as small as possible and stems that are not too thick. Collards have more of a cabbage-like flavor than other greens.

• Dandelion Greens: Local wild and field grown versions of this pleasantly biting green have smaller, more severely saw-toothed leaves than the mass-produced. varieties. Larger dandelion greens can be tough and quite bitter needing more cooking (up to 10 minutes) than the young varieties, which should be cooked quickly (as little as 3 minutes). If gathering your own, make sure the area hasn’t been sprayed with pesticides and the dandelions haven’t yet flowered.

• Kale: This sturdy green loves the cold and is often displayed outdoors because of tolerance to cold weather. When small and tender, kale can be used in salad mixes.

• Mustard Greens: As the name implies, it has a tangy, mustard-like flavor. Smaller leaf varieties such as baby red mustard greens are often found in salad mixes now common in supermarkets.

• Turnip and Beet Greens: While most are left attached to the root vegetable as an afterthought, some varieties of turnips are grown especially for their thin, dark greens. As with mustard greens, their sharp flavor (as well as their coarse texture) mellows with cooking.

When buying greens choose those that have good, green color with leaves that show no or little yellowing, withering or blemishes, and with stems that look freshly cut and are not thick, dried out, browned or split. Often greens are bunched so that the inner parts of the bunch are subject to decay and slime.

Yield will vary depending on the green. They all will shrink when cooked, sometimes to 1/8 of their original volume. As a rule of thumb, figure about 1/2 pound of raw, untrimmed greens per person if the greens are to be used as a side vegetable. That amount can be reduced if the greens are a component in a soup, stew or pasta.

Here are my favorite GREENS recipes:

This article was published in the Santa Rosa Press Democrat on 3-30-22.