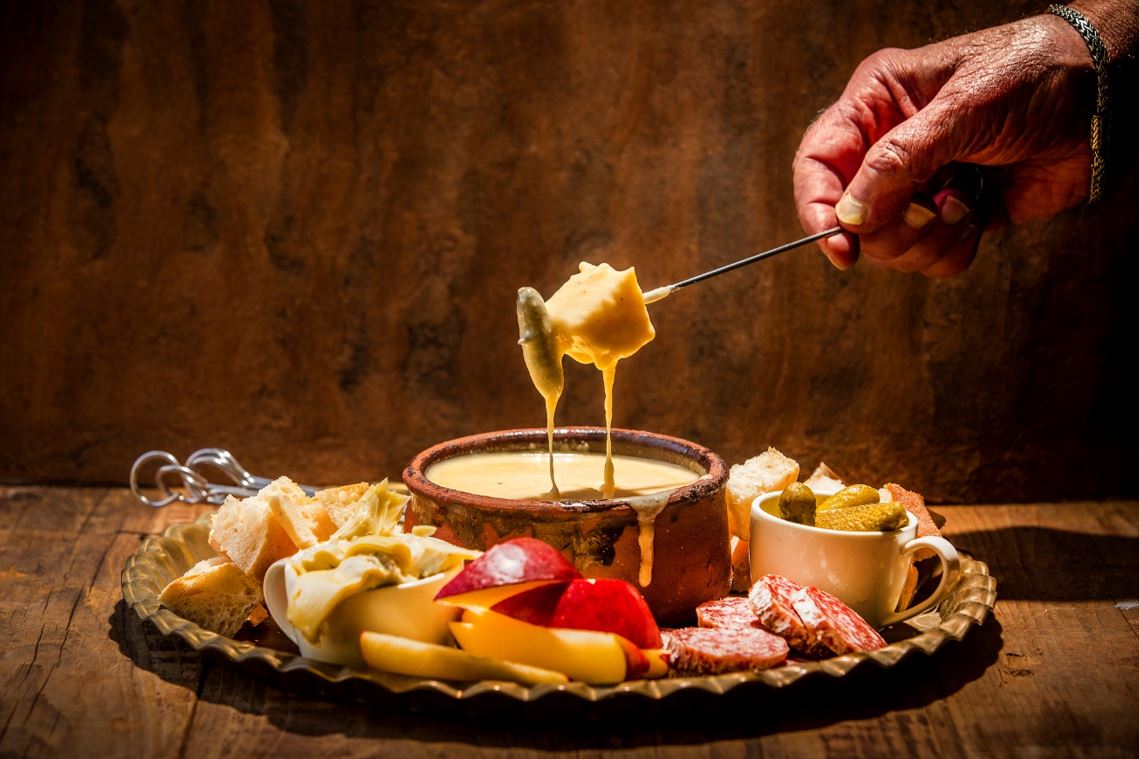 Cheese fondue, the version most of us are familiar with, is believed to have started during the 18th century in Switzerland. It was purportedly a way to use aged cheeses and leftover breads to feed families who had limited access to fresh foods during the wintertime. Local villagers found that if they heated the cheese with wine, garlic, and herbs they could dip their stale bread which would soften when dipped into the flavorful cheese mixture. This way of cooking together over one pot and eating by a warm cozy fire became a Swiss winter tradition known as fondue. The word fondue comes from the French word, ‘fondre’, which means ‘to melt’ and has since then been used to reference many other types of fondue including chocolate.

The traditional cheeses for making cheese fondue are Swiss cheeses, mainly Emmental and Gruyère. Different regions in Switzerland, as well as France and alpine Italy, include other cheeses, including Vacherin, Appenzeller, and Sbrinz in Switzerland; Comté, Beaufort and Reblochon in France; and Fontina in Italy.

Cheese is by no means the only type of fondue. Fondue-like dishes without cheese exist in cultures around the world, such as Chinese hot pots and Japanese shabu-shabu, in which diners cook meat, eggs, seafood or vegetables in a communal pot of bubbling oil or steaming broth. Mexico’s queso fundido is served with tortilla chips rather than bread, while bagna cauda in Italy relies on pureed anchovies for texture and flavor and is typically accompanied by raw or blanched vegetables.

In France, Fondue bourguignonne is a classic variation featuring hot oil instead of cheese with chunks of meat in place of the bread. The meat, first skewered on a long fork, is immersed into the hot oil where it cooks, and is served with an assortment of dipping sauces such as Béarnaise, aioli, and horseradish sauce. Vegetables and seafood are also often served with hot oil fondue.

Chocolate fondue or dessert fondue is thought to be an American invention and had its birth in the mid-20th century. There are several who claim its ‘invention’, but anyone who has had it can vouch for its rightful place in the fondue firmament.

Here are my favorite fondue recipes:

This article was published in the Santa Rosa Press Democrat on 2-16-22.