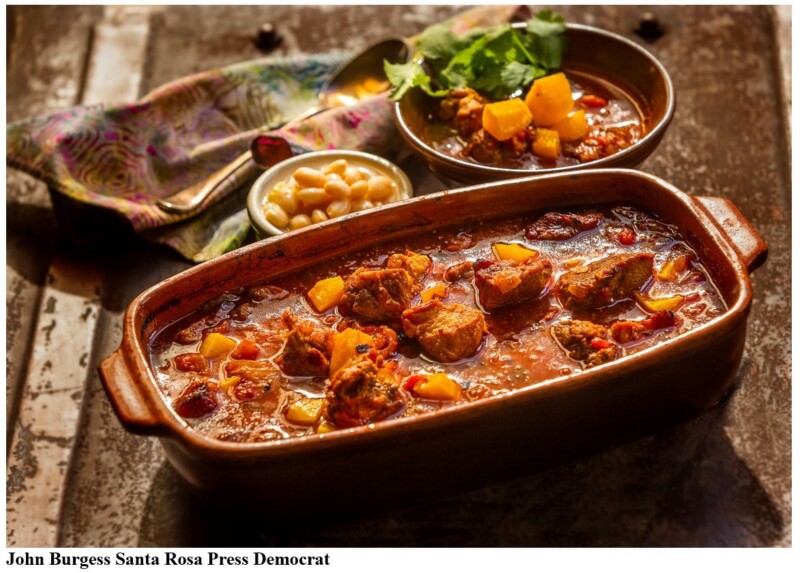 OK . . . here’s your culinary quiz for today: What is a stew? If you look in culinary dictionaries, stews are defined as using a cooking technique called braising. In fact, the words stewing and braising mean the same thing. Braising is a moist-heat cooking technique that breaks down tough cuts of meat and turns them tender and succulent. It’s done at low heat over a relatively long period of time in a pot with a lid on, either on the stovetop or in the oven.

Meats like beef chuck, short ribs, brisket, oxtail, pork shoulder, and lamb shanks are great for braising, as are dark-meat cuts of chicken like thighs and drumsticks. Depending on the meat, cooking time can vary widely from a few minutes for seafood to several hours for a tough piece of red meat. The Oxford Companion to Food notes that stews have many practical advantages: “Everything can be combined in one pot so there is no wastage of fuel and less washing up. The mixture of ingredients in a thick and opaque sauce casts a veil of uncertainty over the proportions of expensive ingredients to cheap ones (I love that observation). It also enables the cook to be away from the kitchen before a meal.”

Traditionally, the meat is first browned in hot fat before covering it either partially or completely with stock or some other flavorful liquid along with flavorings and seasonings and simmered at a low temperature, ideally just below boiling at between 205 and 210° F.

This is the temperature at which the connective tissues in meat breaks down and turns into collagen, which thickens and adds body to the cooking liquid. Sometimes the meat is coated in flour before browning it, which adds additional thickening.

If you’re making stew as opposed to pot roast, you typically cut the meat into smaller pieces, but the cooking method is the same. Vegetables like carrots and potatoes typically go in towards the end of the cook time so that they don’t get mushy. Your choice.

Though traditionally we associate “stew” with red meat, cooked in a single pot the term has now morphed to include any protein. OK, onto some of my favorite recipes. Not all are meat based.

THAI CURRY WITH TOFU AND ZUCCHINI

This article was published in the Santa Rosa Press Democrat on 1-19-22.