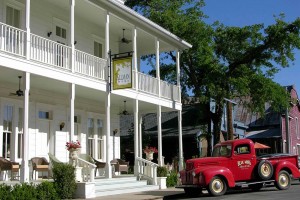 On Saturday evening October 15, the Tallman Hotel in Upper Lake continues its series of
special dinners with celebrity chefs by featuring Chef John Ash, often referred to as the “father
of wine country cuisine.” The menu will feature selections from Chef Ash’s most recent
cookbook, Cooking Wild (Running Press; May 2016; $35).

“I’ve followed Chef Ash’s career – and lots of his recipes – since I began working in the
food industry in San Francisco,” says Tallman General Manager Susan Mesick. “It’s a great
honor to host him here at the Tallman.”

In 1980 Chef Ash opened his namesake restaurant, John Ash & Company, in Santa Rosa.
It was the first restaurant in Northern California wine country to focus on local, seasonal
ingredients used to create dishes that complemented the wines being made in the region. It
continues to be critically acclaimed today.

Chef Ash still holds true to his philosophy of cooking with ingredients that are ethically
grown, created locally and in season. And for John, wine is always considered an essential part
of the flavors of a meal.

Chef Ash has co-hosted a culinary radio show for 27 years on KSRO (1350 AM) in
Northern California. He was also host of two TV shows on the Food Network. In addition, he is
an adjunct instructor at The Culinary Institute of America at Greystone in the Napa Valley.

With regard to his most recent book, Cooking Wild, Chef Ash says that “to eat wild
foods, you needn’t crawl through the forest or hunt your own game. Many wild foods are as
close by as your local supermarket.”

This book takes a big view of “wild,” including over 150 recipes using foraged,
uncultivated foods as well as the progeny of wild foods more conveniently found for sale
alongside their conventional cousins.

Guests at the Tallman Dinner will meet for a reception and book signing with Chef Ash
in Riffe’s Meeting House and then adjourn for a “wild” dinner in the Tallman Dining Room
prepared by Chef Ash and Blue Wing Executive Chef Mark Linback.