Food and Love: The two seem to have always been connected in an intimate dance of the senses. Do you ever think about it and wonder why the two are so intertwined? The most memorable (and sensuous) times of my life have all been around food. Friends, lovers and the dining table are all folded in together like some great soufflé.

I remember an extraordinary Easter that I spent on the island of Crete many years ago. I was with a large Greek family and a bunch of traveling companions. We had met only a couple of days before, but we knew everything about each other. Intimacy like that only seems to happen on the road. It must come from the fact that you can be open and honest because you know that in a few days you’ll never see each other again! 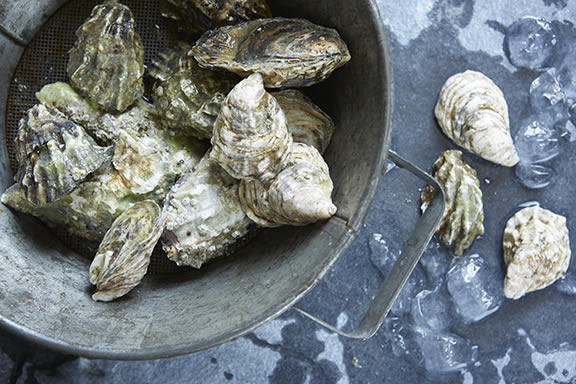 That day for me was mythical (or at least that’s how I’ve built it up after all these years). We started in the morning, on the beach roasting whole young lamb and kids (the goat kind) basting them in olive oil and fragrant herbs. Tomatoes, figs and cheeses were everywhere. The memory of the aromas is still intoxicating. By the afternoon, and with the help of a good deal of retsina, we ate, danced, touched and swore our love and friendship forever. Haven’t we all had experiences like that? What is the magic here?

For all of recorded history, claims have been made that certain foods increase sexual potency and desire. I’ve never found a complete listing of these, but there must be hundreds. The Chinese tout shark fin and birds’ nest (real ones) soups. The Scottish swear by haggis, a mixture of minced sheep innards mixed with oatmeal and spices and then stuffed into a sheep’s stomach and boiled for 4 hours (Scots obviously have a different sense of sensuality!). The Aztecs include cocoa and chocolate (which interestingly were forbidden to their women), The Greeks revered pine nuts according to Ovid, Pliny mentioned hippopotamus snout and hyena eyes and every culture seems to have used oysters. Additionally, caviar, snails and the eggs, glands and genitals of all kinds of birds, animals and fish are said to provide special powers. Even prunes were so highly regarded as an aphrodisiac in Elizabethan times that they were freely served in brothels.

In the garden, apples, figs, bananas, cucumbers, leeks, peppers, tomatoes, avocadoes, eggplant and potatoes have all been attributed with special sexual potentials at one time or another. The obvious connection being that many of them resemble human genitalia! Herbs and edible flowers including roses, lavender, catnip, passion flower, saffron, savory and ginseng root have been celebrated for their special powers.

Anthropologist, Peter Farb, observed that the association between food and sex has existed since man started walking upright. Eating brings couples into close proximity in a situation that does not call for defensive tactics. When you think about it, eating can bind a couple more effectively than sex simply because people eat more often and predictably than they have sexual relations.

Physiologically our nervous system deals in a similar way with both hunger and sexual excitement. We all have very sensitive structures called “Krause’s end bulbs” that are found in both the taste buds of the mouth and in the sensitive parts of our sexual organs. This could explain why sexual desire and a delicious aroma of food both cause our mouths to water!

M.F.K. Fisher notes in her wonderful little book An Alphabet for Gourmets that gastronomy has always been connected with its sister art of love. Passion and sex are the “come-and-go, the preening and the prancing, the final triumph or defeat, of two people who know enough, subconsciously or not, to woo with food as well as flattery”.

Enough of the lore; it’s now time for action! I’ve several favorite recipes that I think are evocative (as well as provocative) of love and sensuality.

Here are four of my favorites: https://chefjohnash.com/recipes/FoodandLove2019.pdf