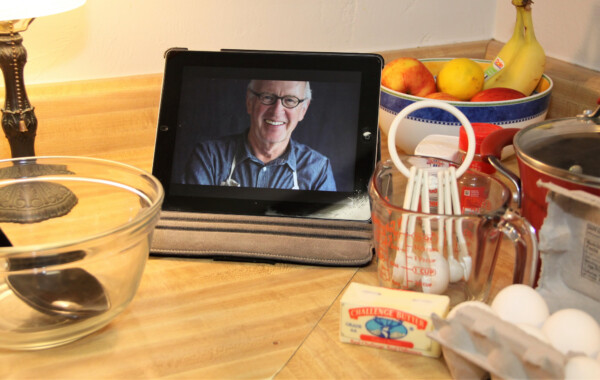 Santa Rosa, CA. December 8, 2020. The Covid-19 crisis has created an opportunity for connection … and cooking. Chef John Ash, referred to as the “Father of Wine Country Cuisine,” was quick to recognize this when approached about a virtual cooking demonstration by Boys Hope Girls Hope San Francisco director, Anjana Utarid.

Her students, or scholars as she refers to them, are highly motivated young leaders who have overcome many obstacles. Utarid explained, “My hope is that scholars will learn to dip their toes into unchartered territory when cooking with Chef John. He is of course a master of cooking and the scholars will learn how to research/shop for ingredients, simple math calculations and the joy of teamwork in creating a new dish.”

It was determined that the best way to expand the transmission from Chef Ash’s kitchen to not only the scholars in San Francisco, but to the global Boys Hope Girls Hope communities. Scholars from Boys Hope Girls Hope of Southern California, Guatemala and Illinois will cook on the air with Chef Ash, with hundreds of others tuning in for the live show that is open to the public on Thursday, December 10 at 4 p.m.

Chef Ash has posted the two recipes he will be preparing:

Chef Ash is excited about the event with Boys Hope Girls Hope. “I love the artistry of cooking, but even more fulfilling is passing along what I know to those who are new to cooking or are in the process of developing a passion for the culinary arts.”

Many refer to Chef John Ash as the “Father of Wine Country Cuisine.” In 1980 he opened his namesake restaurant, John Ash & Company, in Santa Rosa, CA. He also hosted two shows on the Food Network. John has been an adjunct instructor at the Culinary Institute of America Greystone for many years.

John has written five books and is a two-time James Beard Award winner.  Culinary Birds won a 2014 James Beard award and John Ash Cooking One-on-One won in 2005. He has authored two other books: From the Earth to the Table and American Game Cooking. The former was awarded the IACP Julia Child Cookbook of the Year.  His latest book Cooking Wild was published in summer of 2016 by Running Press. He is at work on a new book: Soup: The Original Comfort Food.  He writes occasionally for culinary magazines such as Fine Cooking and Eating Well and contributes regularly to the Santa Rosa Press Democrat.

John was honored in 2014 by the Monterey Bay Aquarium as Sustainable Seafood Educator of the Year.

Boys Hope Girls Hope currently nurtures and guides 1,200 motivated young people in need to become well-educated, career-ready men and women for others in 14 US and two Latin American affiliates.

Since 2000, Boys Hope Girls Hope of San Francisco has been helping scholars rise up form disadvantaged backgrounds and strive for more. We serve youth who want to go to college and create successful futures for themselves. Our goal is to graduate young people who are physically, emotionally, and academically prepared for post-secondary education and a productive life, breaking the cycle of poverty. The mission is to nurture and guide motivated people in need to become well educated, career ready men and women for others.