As seen in the Press Democrat!
https://www.pressdemocrat.com/lifestyle/9179577-181/celebrity-chef-john-ash-gives

Schnitzel holds a very special place in my heart (and stomach). My Grandmother used to make it often and she was the master of schnitzels of all kinds. It was such a favorite that used to call me her “little schnitzel” which I think (I hope) talked to how special this preparation (and of course me) was. If you like fried chicken, schnitzel is for you. 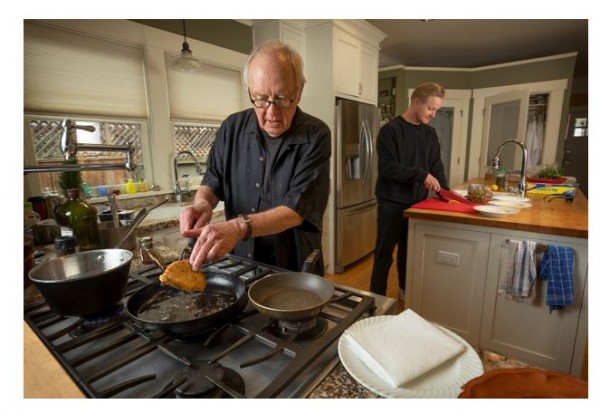 Schnitzel is a German-Austrian term which translates roughly to “slice” or “shave” according to the Oxford Dictionary. It’s described as a slice or “scallop” of veal or other light meat that is pounded then dusted with flour, egg and bread crumbs and fried. Not a particularly evocative description but most would agree it’s damned delicious and easy to do.

In Germany there are many variations that you’ll find in restaurants and homes:
• Weiner-Schnitzel usually made with veal. The “Weiner” designation refers to its supposed origin in Vienna in Austria (tho’ there is some dispute about this).

• Schweine-Schnitzel made with pork or pork tenderloin

• Puten-Schitzel made from turkey breast

• Hänchen-Schnitzel made from boneless, skinless chicken breasts or thighs

In addition to different types of meat a schnitzel can also be served with a topping or filling. Here are some of the more traditional combinations:

The schnitzel approach is not uniquely German. Other cuisines have their own variations on the theme such as:
• Scallopini, Picatta or Milanese in Italy
• Tonkatsu in Japan
• Chicken Fried Steak in the American Southwest

This may be way more than you want to know but I find recipe similarities fascinating as they morph and move around the world. The method is straight forward:

• meat is gently pounded between sheets of plastic wrap. This is done to achieve an even thickness (usually 1/4 inch or so) for even cooking and to tenderize the meat. Use the flat side of your meat pounder to avoid tearing. If you don’t have a meat pounder, a rolling pin or even a heavy bottomed sauce pan works just fine.

> Get the full story and all recipes with photos on this PDF!