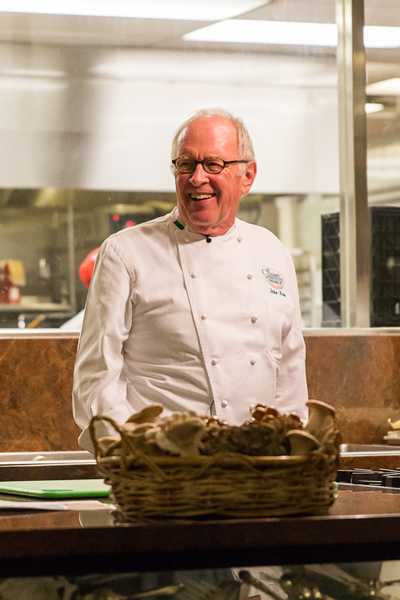 Chefs reveal tricks and tips for food-and-wine pairings and cooking like a pro
When they aren’t working hard in restaurant kitchens, Wine Country chefs are developing new recipes, conducting virtual cooking classes and keeping their home pantries stocked with their versions of essentials. Three widely-known North Bay chefs share their thoughts about eating well and pairing good food with good wine, offer favorite recipes, and give home chefs a few tips for cooking like a pro.

Chef John Ash
During one of his trips to Sonoma County in the early 1970s, John Ash, then a San Francisco resident, was treated to dinner by a winemaker friend, who said he was taking him to the best restaurant around. “At that time there were no great restaurants in the county, and the place he took me served canned vegetables––in the middle of summer,” says Ash. “It hit me that I could be a big fish in a small pond.”

Sonoma reminded him of the countryside of France both in terms of its ecology and its availability of fine ingredients. He eventually opened a combination wine shop-restaurant in Montgomery Village, a unique strategy for its time in 1980. The first John Ash & Company went on to receive national acclaim for offering a fine dining experience with a menu of seasonal, locally-sourced ingredients and an emphasis on pairing wine and food, a novel concept at the time. Over the years, he has written five cookbooks, including From the Earth to the Table, which won a Julia Child Cookbook of the Year Award from the International Association of Culinary Professionals, as well as two James Beard awards for “Cooking One on One” and “Culinary Birds.”

Not bad for a kid raised by his grandparents on a cattle ranch in Colorado, and who didn’t attend culinary school. “We were just poor mountain folk, but we didn’t realize it at the time,” says Ash.