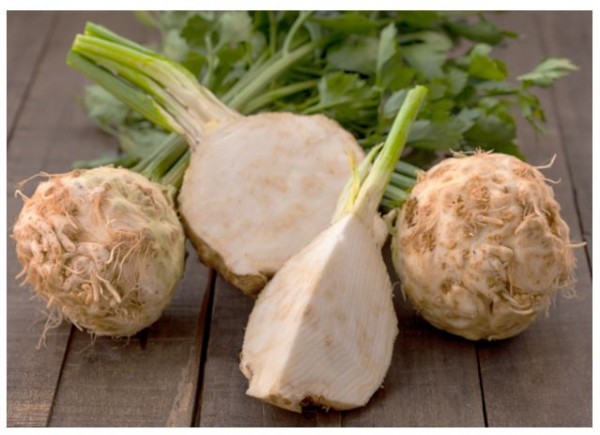 The “Ugly Knob” description came from the Grande Dame of British food writing, Elizabeth David, who had great affection for this homely looking root vegetable. In case you aren’t familiar with her, she predated Julia Child in teaching us about French and Mediterranean cooking. Worth having at least one of her books in your library. I love celery root too along with those other underused root vegetables like parsnips and rutabagas.

Celery root’s season runs from winter through late spring and I’ve seen it available in most parts of the country during the cold weather months. Celery root can also be grown as a summer crop in cool weather regions. Unfortunately, unless you’ve had some direct experience with it, it often just sits in the market untried. What a pity! It has a long culinary heritage in Northern and Eastern Europe and especially France where a glorious salad is prepared combining it with a tangy mustard mayonnaise dressing (recipe below). For anyone who has traveled in France you’ll no doubt remember it being offered in all the little charcuteries and bistros.

Celery Root (or celeri rave as the French call it) is a variety of the common branch celery that is cultivated for its root rather than its above ground stalks. It’s often sold with its puny tops attached which can be used in flavoring soups and braises but be aware that the flavor of these little stalks is much stronger than ordinary branch celery so use judiciously.

The roots come in all sizes from large apple to small cantaloupe size brutes. I find the best ones are those that are a little smaller and feel “heavy” for their size. Sometimes celery roots can have a spongy almost hollow center which makes them a little less desirable for certain preparations like the salad or fries recipes following. Also look for roots that are comparatively clean, without a lot of “rootlets” and with smoother skins which makes them easier to peel.

Celery root is not a particularly easy crop to grow if you are a gardener. It grows very slowly. It can take as long as 6 months to mature and as a result farmers are less likely to grow it since it takes up ground for such a long time. It is a great “keeper” however that stores if it’s kept cool and dark. When homes had root cellars, this was often one of the staples in residence there. I’m lucky to have a terrific family farm nearby (Imwalle Gardens in Santa Rosa) who, in addition to having been in business since the 1880’s, grow great celery root. Thank you, Joe Imwalle! They have been the inspiration and source for some of my favorite recipes like those following.

Print this article and adjoining recipes!