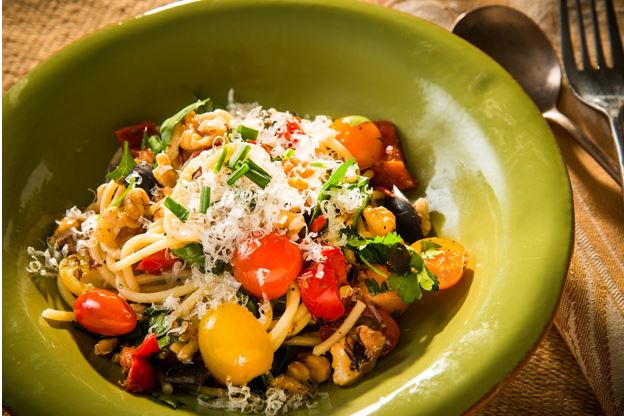 This is a mash-up of Julia Child’s original Spaghetti Marco Polo along with some additions via Arthur Schwartz’s “Garbage Pail Pasta”. Arthur was a long time radio personality on WOR in New York City, author of several cookbooks and has a great blog called “The Food Maven”. In the latter Arthur took inspiration from a Neapolitan restaurant which was founded by brother midgets known as I Corti (“the little people” in Italian). The typical Neapolitan condiments of capers and raisins are added to this adapted Julia version.

Mix the first 8 ingredients together in a bowl and set aside. Cook spaghetti al dente, drain and toss with a bit of olive oil. Season well with salt and pepper. Spoon walnut mixture over spaghetti and toss. Top with cheese and serve.