One of nature’s great food gifts I think is crab. I’ll never forget my first taste of crab. I was a very small kid on my first visit to Fisherman’s Wharf in San Francisco and there were giant steaming kettles everywhere in which fresh Dungeness crab were quickly cooked and then served up. We sat at a big picnic table covered with newspaper and spent the next couple of hours picking out the meat, sucking on the shells and eating it simply with a squeeze of fresh lemon. Those kinds of shared times around the table are unforgettable. 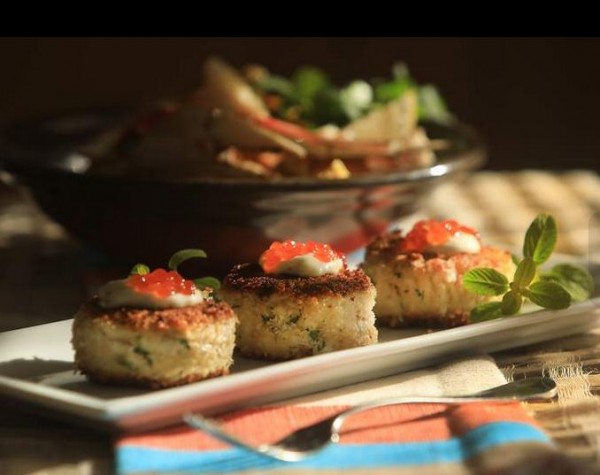 According to the Oxford Companion to Food there are estimated to be at least 4500 different crab species in the world. They range in size from the tiny pea crab which, as the name suggests, is about the size of a pea all the way up to the giant Japanese Spider crab which can measure as much as 12 feet from claw tip to claw tip.

In the USA, the four best-known crabs are Blue Crab, a species found on the Atlantic coast down to the Gulf of Mexico; Stone Crabs from around Florida and the southeast; King crab made famous by the television series “Deadliest Catch” and Dungeness crab from the Pacific Northwest.

For Blue crab, the Chesapeake Bay is perhaps the most famous home for these delectable little creatures. It’s a delicious sweet crab with a beautiful blue color before cooking. Most of the meat comes from the body. When Blue Crab molt or shed their shells, which they do annually from April thru September, they are known as “soft shells”. They are loved because you can eat them shells and all. They’re best when you buy them alive and quickly sauté or deep-fry them so that the soft shell becomes crispy. This condition lasts for only a short time (a few hours) but ingenious folks have figured out a way to control this by taking them out of the seawater where they will stay alive for several days and the shell won’t harden.

Stone crabs are sought after for their claws alone. The two front claws are not only delicately sweet, and powerful enough to crack an oyster shell (stone crabs feed on oysters, mussels, and fish) they’re also “renewable”. That is, they’ll grow new ones in a couple of years. There are lots of opportunities to try Stone crab if you haven’t already by doing a quick on-line search.

Dungeness Crab is found on the Pacific coast from Southern California up to Alaska. It gets its name from the village of Dungeness on the strait of Juan de Fuca in Washington state. They are larger than Blues and yield succulent sweet meat from both the body and the legs and claws. When cooked simply in boiling seawater the shell turns a bright red.
Since I live in Northern California my favorite crab is of course, Dungeness. Beginning in November, which is the opening of crab season, I look forward to reliving those gustatory memories of that little kid on Fisherman’s Wharf. If you are intimidated by cooking or cleaning crab, there are lots of online tutorials. A good starting place is https://www.wikihow.com/cook-dungeness-crab.

One of the most fun crab events of the year is held in late January in Mendocino County about 3 hours north of San Francisco. It’s called Mendocino Crab and Wine Days. It’s a 10-day countywide event in which all kinds of activities including trips on crab boats, special tastings with crab at Mendocino wineries and restaurants and of course crab cook offs and competitions.

It’s a magical time to be on the Northern California coast. Pacific storms blow in that are both beautiful and powerful. It makes you appreciate the work and courage of crab fishermen. For more information on this year’s Crab and Wine Days celebration in Mendocino in January. Go to https://mendocino.com/mendocino-crab-wine-days-festival.

Here are some of my favorite crab recipes. You can use whatever crab meat is available to you but of course it must be Dungeness!

Print this story and get the recipes here.