FOCACCIA: A BREAD ANYONE CAN MAKE 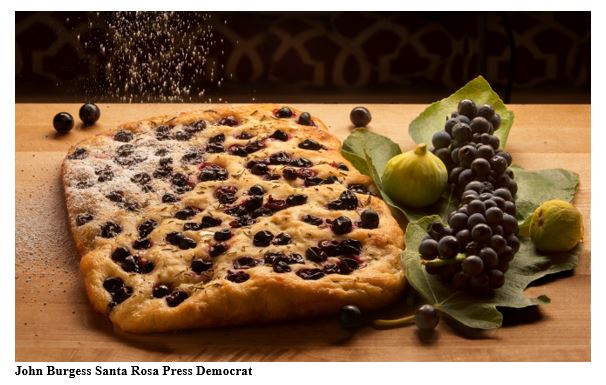 Focaccia bread is one, if not the most, famous of Italian flatbreads. The word focaccia (pronounced “foh-KA–cha”) has Latin origin. The translation is “baked in coals”.  Many believe that pizza evolved from focaccia and came later.

There are many kinds of focaccia in Italy which vary in terms of toppings, stuffings, sweetness, etc. but the most classic and familiar is the version made in Liguria and its capital Genoa. It’s about 1/2 inch thick, a little chewy but still soft and spongy inside.  It’s generously coated with extra virgin olive oil and coarse sea salt that helps create the perfect crust. For those bread geeks out there, traditional Focaccia Genovese has a 55% hydration ratio.

Focaccia has many variations which is typical of Italy.  Most of us mainly have had experience to the classic Focaccia Genoese or Fugassa in the Genovese dialect.

Though ingredients remain basically for all types of focaccias: water, flour, yeast, extra virgin olive oil and salt. Pretty much the same as those for pizza, there are a couple of variations worth mentioning.  The names change as you move from one region of Italy to another.

There are also many other types out there, less famous but still delicious.  One of my favorites:

I’ve included 2 similar recipes for the classic Genovese version.  The first made the same day and the second a slow rise/no knead version.  Both are delicious but the slow rise gives the dough a chance to develop more flavor.

Slow rise/no knead breads were made popular by Jim Lahey, owner of New York’s Sullivan Street Bakery, in his book My Bread which completely changed bread making in America for home bakers, making bread baking simpler and pretty foolproof.  His no-knead bread recipe is still one of the most popular that the New York Times ever offered.